Starting out with WordPress is relatively easy. There are countless technical articles and how-to videos available on the internet that help you get started with WordPress and its popular extension, WooCommerce, in no time at all.

But what if you wanted some extra functionality? Well, that usually involves you getting into the codebase of your WordPress site. For non-techies, touching the code presents a monumental challenge.

This is where WordPress and WooCommerce developers come in.

Agencies and individuals well-versed on everything WordPress, these entities make sure that a WordPress website is developed in accordance with client needs and requirements.

To give you a run-down on the latest developments in the industry, we sat down with Rafael Minuesa – WordPress and WooCommerce developer. Let’s see what he has to say on WordPress.

Zubair: Hi there Rafael, can you tell us a bit about yourself and what you do?

Rafael: My official title these days is WordPress & WooCommerce developer, and that’s pretty much what I do 90% of the time. However it has not always been this way. I studied Graphic Design and Commercial Arts in Sydney, Australia, and worked for many years in the printing industry in different countries.

In 2006, while working as a layout designer for a printed magazine, I was tasked with creating a web version of the magazine reusing the output originally created by QuarkXPress, and I decided that WordPress was a good fit for that particular task. Since then I’ve been more and more involved with web projects, especially with WordPress and WooCommerce. I hardly do any printing-related work these days, although I must confess I kind of miss it, sometimes.

I currently work at Codeable and WordPress and WooCommerce are my daily bread. Sometimes I work with other packages, such as Drupal and MediaWiki, but the market demands WordPress, and this trend only keeps growing stronger all the time.

Zubair: By how much, do you think, the WordPress web development market has evolved over the years?

Rafael: Nothing short of phenomenal. As of today WordPress is the world’s most popular CMS powering about 35% of all websites on the Internet, and 15% of all the world’s top websites, while WooCommerce powers about 30% of all shops on the Internet, and 22% of the top 1 million ecommerce sites in the world. According to Open Hub’s Project Cost Calculator, WordPress took an estimated effort of over 112 person-years, as calculated by 423,759 lines of code. That gives you an idea of the size of this project.

Those figures are well beyond anyone’s wildest dreams, and in regards to the Web Development Market, it has meant lots of opportunities for web designers and developers like myself. It could be argued that perhaps this would have happened anyway, regardless of what platform had become more popular, but the reality is that as of today WordPress keeps expanding and powering a large percentage of web projects, and therefore the demand for WordPress specialists keeps growing as well. Last year the demand was especially strong, probably because a large part of the population was forced to stay at home, and as a result many particulars and companies decided to explore further into Internet businesses.

Zubair: Okay, now that we’re done talking on WordPress, allow me to ask you the same question for WooCommerce development? How much of an impact it has had as a platform for businesses?

Rafael: WooCommerce was already a great package back when it began in 2011 as a product of a company called WooThemes, until it was acquired by Automattic in 2015. But since they are part of Automattic, WooCommerce has expanded even more, powering now nearly 30% of all online stores.

As you can imagine WooCommerce is today a referent in eCommerce. There are alternatives, such as Magento, Shopify or Squarespace, but at  the end of the day WooCommerce keeps growing because of the same reasons WordPress does, when compared to other packages such as Drupal, for example.

Zubair: There’s a pressing question I need to talk about and it’s whether or not WooCommerce is scalable?

And the answer is yes, it is scalable, but it all depends on many factors, such as the Web Hosting environment, the code in Theme and plugins, database optimization, caching strategies, to name a few. Of special importance is to take into account that the shop will need to be prepared for a large number of concurrent users processing high volumes of data, which can consume server resources very fast.

For further info you could visit the WooCommerce Scaling FAQs page, where they assure you “it is a myth that WooCommerce and WordPress don’t scale”. When asked about how many products WooCommerce can handle, they say that “Sky is the limit” and they point to stores that have 100,000+ products, and able to handle thousands of transactions. However, what all these stores have in common is great hosting providers coupled with professional developer teams always available to solve optimization issues.

Zubair: In your opinion Rafael, how much does a good web host contribute to WordPress development? 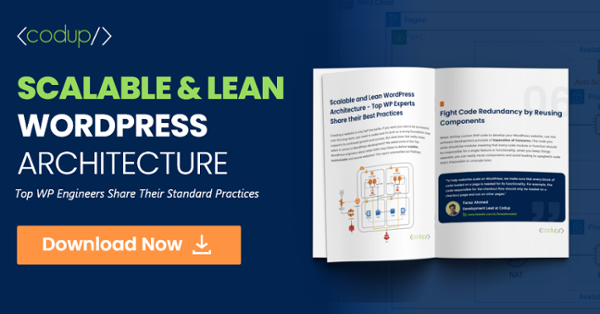 Rafael: It is essential, period. Over the years I had to educate many of my clients on this matter because they didn’t see it as such an important factor.

If you’re really serious about having an online business don’t try cutting corners on web hosting, and make sure you get the best possible resources for your requirements.

Zubair: Considering the situation in the pandemic, how much do you think WordPress and WooCommerce development services are expected to grow?

Rafael: From my experience the pandemic has made the demand for WordPress and WooCommerce development services stronger. There’s more demand for Web Development work in general, and I also see a lot of customers who are venturing into this environment for the first time, and because they’re not technical-savvy they choose WordPress and WooCommerce, which they see as an user-friendly complete solution.

Perhpas I’m being optimistic, but I expect even more exponential growth in the future, since so many people have recently been exposed to the benefits of working and making businesses online.

Zubair: Last question: can you share a photo of your workspace or your team?

We’re going to be honest, Rafael was a treat to talk with. His opinions on WordPress and WooCommerce are highly informative and can give you an insight on the direction these two platforms are heading towards.